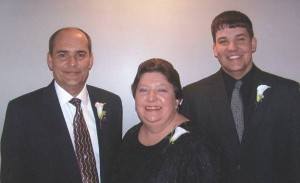 Roger and Pat Redig purchased the Wharton Funeral Home on January 1, 1991. Roger is the son of Melvin and Betty Redig and was born and raised in Storm Lake. He graduated from the Storm Lake High School in 1974. He married Patricia Cowell on June 24, 1978 in Cedar Rapids. Pat is the daughter of George and Joanne Cowell of Storm Lake.

Roman Redig, son of Roger and Pat, graduated from the Aurelia High School in 2008. He continued his education at Western Iowa Tech Community College, being on the Dean’s list. He then attended the Des Moines Area Community College, Department of Mortuary Science, from which he graduated with high honors in 2010. He returned to Aurelia where he served his internship and became fully licensed in 2012. Roman was united in marriage to Shelby Meyer on June 15, 2019.