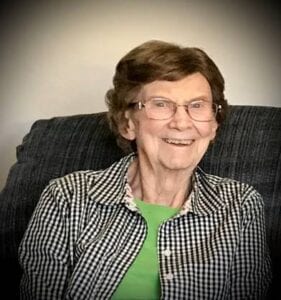 Funeral services for Florence N. Tuttle, 90, of Aurelia, will be held Friday, May 21, 2021 at 10:00 AM at the St. Paul Lutheran Church in Aurelia with Pastor Derek Evans officiating. Burial will be at the Immanuel Lutheran Cemetery, rural Aurelia. Visitation will be Thursday from 5:00 P.M. until 7:00 P.M. at the church.

Florence Naomi Polzin was born February 9, 1931, the daughter of Alvin Fredrick and Frieda Marie (Klein) Polzin at Alden, Iowa. She attended elementary school there until the family moved to Des Moines in 1942. She graduated from high school and then worked as a clerk and secretary in various offices in Des Moines. On September 21, 1952 Florence married Ernest Arnold Tuttle at the Trinity Lutheran Church in Des Moines. She was a homemaker and actively worked on the family farm. She also served as the secretary at St. Paul Lutheran for over 40 years. Florence was a member of the St. Paul Lutheran Church. She was a great cook and baker, and enjoyed her family, gardening, flowers, and crocheting.

Florence died Sunday, May 16, 2021 at Accura Healthcare in Aurelia.