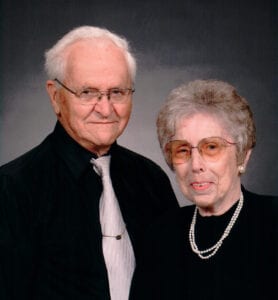 Memorial services for Kenneth and Lois Jean Engdahl, of Aurelia, will be 10:30 A.M. Saturday, April 3, 2021, at Bethlehem Lutheran Church in Cherokee. Inurnment will follow at the Pleasant Hill Cemetery, rural Aurelia. There will be no visitation. The Redig Funeral Home in Aurelia is in charge of arrangements.

Kenneth Conrad Engdahl was born April 21, 1926 east of Aurelia, the son of Conrad and Helena Augusta (Peterson) Engdahl. He attended school in Aurelia. As a young man Kenny lived with and worked for Claus and Ingeborg Magnussen who treated him as their own. A fellowship continued till their deaths.

On February 10, 1949 they were joined in marriage at the Methodist Church in Aurelia. They farmed south of Aurelia.

On December 27, 2020 Jeannie died at the Cherokee Regional Medical Center in Cherokee at the age of 92, and on January 2, 2021 Kenny died at home in Aurelia at the age of 94, to be together with his bride of nearly 72 years.

Jeannie utilized her education as a bookkeeper for the farm, several years with the ELCA Lutheran Synod, Des Moines, and more locally she served on the Sioux Valley Hospital/Cherokee Regional Medical Center board for 24 years. She was a member of the Diamond Doers ladies club with all the other Diamond Township ladies.

Kenny believed farming in Diamond Township for their lives was a life blessing. He really liked “neighboring”. Kenny was an avid farmer and cattleman. He was a member of the Cattleman’s Association for several years, attending many conventions when possible. His faith guided him at the Bethlehem Lutheran Church in Cherokee.

Active as youth counselors in early years, physically active as a new church was being built and an old church razed, Kenny spent many hands on hours working on the new church, and raising money for the new church. When the Church men assembled to work on the Lutheran Lakeside Camp he was there helping to turn the pasture into a religious experience of camping for many young campers in northwest Iowa. And in his later years, he and other “old faithfuls” would help out keeping the camp in good shape for youth campers.