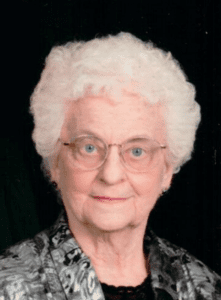 Private family services for Lila Schwanz, 85, of Aurelia, formerly of Alta, will be held at a later date. The Redig Funeral Home in Aurelia is in charge of arrangements.

Lila Marilyn Grienke was born to Paul and Millie Grienke in Alta on March 13, 1935. She graduated from Fairview School in 1954. Lila married Wilbert Dean Schwanz on April 17, 1955 at the Trinity Lutheran Church in Alta. This union was blessed with three children; Brenda, Brian, and Rhonda. They lived in the same house in Alta all their married life. She enjoyed travel, antiques, and going gambling.

Preceding Lila in death were her parents, her husband Wilbert on January 28, 2019, one daughter, Brenda (Schwanz) Matsen, two brothers; Orlin and Robert Grienke, and one brother-in-law, Joseph Lichter.

Survivors include her two children; Brian and his wife Colleen Schwanz of Alta, and Rhonda and her husband Tony Coombs of Aurelia, son-in-law Jess Matsen of SanTan Valley, AZ, three grandchildren; Jennifer and her husband Chad Curtis of Arlington Heights, IL, Ashley and her husband CJ O’Brion of Chandler, AZ, and Miranda and her husband Chris Sliefert of Sac City, IA, and seven great-grandchildren; Spencer and Lauren Curtis, Taylor and Avery O’Brion, and Jaxsen, Bryson, and Elle Sliefert. Also surviving are one sister, JoAnn Lichter of Omaha, NE, one sister-in-law, Josephine Grienke of Alta, nieces and nephews and other relatives and friends.