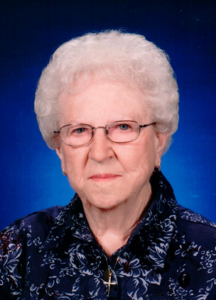 Private graveside services for Eleanor Anderson, 101, of Aurelia, will be held Saturday, September 19, 2020, at the Afton Township Cemetery, with Pastor Karen Berg officiating. There will be no visitation. The Redig Funeral Home in Aurelia is in charge of arrangements.

Eleanor Mae Blake was born July 11, 1919, the daughter of John D. and Agnes Marie (Scott) Blake, in Afton Township, Cherokee County, Iowa. She attended Afton #2 rural school for eight years, her freshman year at Wilson High School in Cherokee, then the Aurelia High School where she graduated in 1937. In the fall of 1938 she completed a shorthand and advanced typing course at Dickinson Secretarial School in Omaha, Nebraska. Eleanor was very proud of her heritage; she descends from six ancestors that came to America on the Mayflower, and was a member of the Daughters of the American Revolution (DAR).

On March 21, 1944 Eleanor was united in marriage to Wilmer E. “Teeny” Anderson by Rev. J.A. Farnsworth at the Methodist Church in Cherokee. To this union one son was born, David Wilmer, on March 21, 1946. They moved from Aurelia farming area to Alta area in March of 1955, and retired from the farm on Highway 3 into Alta in 1987.

Eleanor died Wednesday, September 16, 2020 at UnityPoint St. Luke’s in Sioux City, Iowa. She had been a resident at Acura Healthcare of Aurelia.