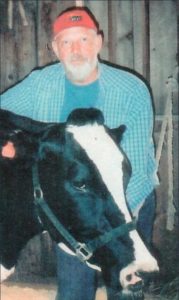 Visitation for Loyd Reineke, 80, will be held on Sunday, August 30, 2020 from 1:00 P.M. until 5:00 P.M. at the Aurelia Community Center, with the family present. Masks and social distancing are required. Private family burial will take place at the Sunset View Cemetery in Washta at a later time. The Redig Funeral Home in Aurelia is in charge of arrangements.

Loyd Henry Reineke was born on May 6, 1940, the son of Lester Fritz Herman Reineke and Mildred Kathleen (Kroll) Reineke, at Holstein, Iowa. He attended country school and then graduated from Holstein High School in 1958. On May 17, 1961, Loyd married Sharon Lee Zarr at the St. Paul Lutheran Church in Holstein. Loyd worked for two weeks as bakers’ apprentice, five years for Simonsen’s in Quimby, and for forty one and half years for Wilson’s/Tyson in Cherokee, retiring in 2007. He was a member of St. John Lutheran Church at Hanover, the Cherokee County Friends of Conservation, the Cherokee Ridge Runners, and the Iowa Trappers Association. His passion for the outdoors included being a third generation honey bee keeper, and enjoyed trapping, hunting, and fishing, and going to Texas during the winter.

Survivors include his wife Sharon of Cherokee, three sons; Wayne Reineke of Long Beach, CA, Duane and his wife Rhonda Reineke of Livermore, IA, and Ernest and his wife Melodee Reineke of Clear Lake, IA, four grandchildren; Ashley Reineke, Allyssa and her husband Curtis Peterson, and Kirsten and Kara Reineke, and four great-grandchildren; Treyson Gade, and Nathan, Ayva, and Chase Peterson. Also surviving are one sister, Patricia Huebner of Akron, IA, two brothers; Steven Reineke of Archer, IA, Junior and his wife Jean Reineke of Ames, IA, two sisters-in-law; Peggy Reineke of Phoenix, AZ, and Mercedes Reineke of Norcross, GA, and many nieces and nephews and other relatives and friends.