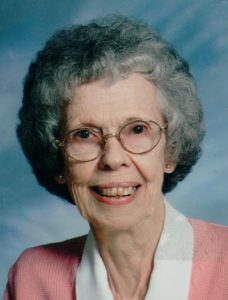 Funeral services for Cleone C. Mickelson, 94, of Aurelia will be held at 10:30 A. M. Thursday, July 23, 2020 at the St. Paul Lutheran Church in Aurelia with Pastor Derek Evans officiating. Burial will be in the Barnes Township Cemetery in Linn Grove, IA. Visitation will be Wednesday from 5:00 to 7:00 P.M. at the St. Paul Lutheran Church. The Redig Funeral Home in Aurelia is in charge of arrangements.

Cleone Caroline Haldin was born August 30, 1925 the daughter of Rudolph and Esther (Larson) Haldin at Milford, Iowa. Cleone graduated from the Sioux Rapids High School. She worked as a waitress at the hamburger shop in Sioux Rapids. During World War II she worked as B52 Riveter in Kansas City.

On December 1, 1946 Cleone married Richard Amon Mickelson in Jackson, MN. They farmed north of Aurelia in Afton Township. Cleone was a very active member of the St. Paul Lutheran Church and was a past president of the Ladies Aid. She was a member of the Afton Community Club and enjoyed neighborhood potlucks and card club. At home she enjoyed gardening and cooking. Cleone loved time with her family and grandchildren. She was a wonderful mother.

Preceding Cleone in death were her husband Richard on January 23, 1992, her parents, two brothers; Lyle and his wife Joyce Haldin and Richard (Dick) and his wife Donna Haldin, one sister, JoAnn Obman, and one brother-in-law Lester Bjorklund.