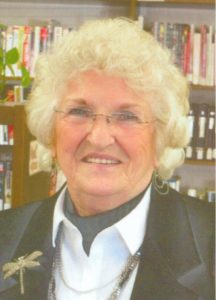 Berniece Spinelli, age 86, of Aurelia, went home to be with her Lord and Savior, Jesus Christ, on Tuesday, June 4, 2019 at Mercy One in Sioux City, Iowa.

Funeral services will be held on Monday, June 10, 2019 at 11:00 A.M. at the Aurelia Community Center, with Pastor Adam Costilla officiating. Burial will be in the Good Hope Cemetery, rural Cherokee. Visitation will be Sunday, from 3:00 to 5:00 P.M., with the family present, at the Aurelia Community Center. The Redig Funeral Home in Aurelia is in charge of arrangements.

Berniece Johnson was born on March 14, 1933 the daughter of Olaf and Flossie (Smith) Johnson in Cherokee. She was one of nine children. Berniece graduated from Wilson High School in Cherokee. On May 1, 1986, Berniece married David Spinelli in Elk Point, South Dakota. She and David lived most of her life in Cherokee and Aurelia.

Later in life Berniece pursued a degree in nursing, graduating from Western Iowa Tech in 1975 as an L.P.N. and began her career at area nursing homes and then at M.H.I. in Cherokee. She also authored a book published in 2013 titled “The Hills Were His Home”, her personal and historical account of the life of her grandfather, Thomas “Barney” Smith. She loved gardening and caring for her many flowers over the years. She loved playing cards with her family and belonged to several Bridge groups in the area, which she especially enjoyed.

Berniece very much enjoyed visits with family and friends which also reflected her love for life, and her Christ-like love for family and others. She had been a member of the Grace Independent Baptist Church in Cherokee for much of her adult life and was now a member of the Independent Baptist Church in Storm Lake. She shared the gospel whenever she had an opportunity and many accepted the Lord through her witness and testimony. It was most important to Berniece that the Lord be glorified in her life, as well as in her death.

We all love her and miss her, yet have much comfort in knowing we will be with her again in our eternal home with Jesus Christ.