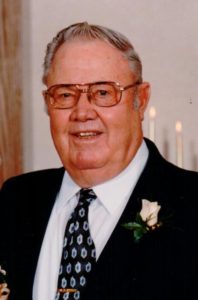 Robert Laverne Sorensen was born March 13, 1930, the son of Fred and Audrey (Koehler) Sorensen at Cherokee, IA. He attended school in Sioux City. Bob served in the U.S. Army. He married Barbara Beckner and they had seven children. On December 6, 1969 Bob married Barbara (Rokes) Nilles in South Sioux City, Nebraska. Together they had one son, Robert L. “Bobby” Sorensen, Jr.

Bob spent most of his working years driving truck for Cliff Benson, Orlo Shank, and Maple Valley Woodshavings in Aurelia. He then retired from First Coop in Alta. Bob was a member of the First United Methodist Church in Aurelia. He enjoyed fishing, camping, and eating out. His greatest joy was spending time with his family.